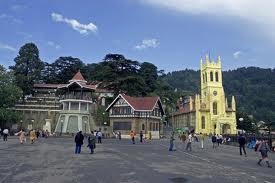 It is a picture postcard perfect November day on Shimla’s Ridge and Mall road, bright sunshine and many holiday makers from all over India and abroad .

Then there is a jolt , almost a surreal scene as you see a pack of stray dogs , big , ferocious , menacing , prowling on this fashionable street and the crowds stop and look in disbelief and amazement .

The dog packs sometimes number 30 and even 40 and you wonder if you’re somewhere on the African plain in wild dog country , except that these dogs are much larger than their African wild cousins .

Most are local pahari breeds with long hairy coats as they make their way among the milling crowds on the Mall and the Ridge the two favourite tourist haunts in downtown Shimla.

Until this summer hundreds of these stray dogs were sheltered in Shimla’s dog houses where they were regularly fed and looked after .

But for some reason animal rights activists did not like this and moved a court here and had them released into the streets of Shimla saying that like us dogs had every right to be on the streets as they were stray dogs .

They argued it was cruelty to keep them in dog houses . So the civic authorities meekly let loose these animals onto the streets saying they are helpless .

But many Shimla citizens are asking what if these huge dog packs attack a tourist some night , maybe even a child on the street some day what then who is answerable then!

Meanwhile all of Shimla looks on helplessly while the civic officials look the other way and murmur excuses——– and dogs rule Shimla streets !