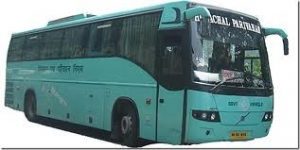 Shimla: Ahead of the heavy tourist season the Himachal Pradesh Tourism Development Corporation(HPTDC) will start a high-tech multi-axel bus service between Shimla and Delhi from Tuesday.

The night service luxurious bus will travel via Punjab’s Zirakpur bypassing Chandigarh on its way to Himachal Bhawan in Delhi.

The service will be available on alternative days as the same bus will return from Delhi’s Himachal Bhawan at 9:30 pm the next day for Shimla .

The ticket cost will be Rs 880 which is higher than the normal Volvo.

This is the latest Volvo model bus with far better and high-tech seats than older models.

An official of the HPTC said if the response was good it could be made into a daily service.

HPTDC already has has four Volvo buses plying on the Manali-Delhi route and two between Shimla-Delhi.