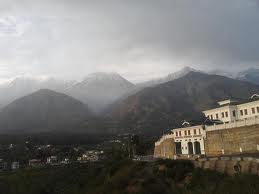 Shimla : The first assembly session of the newly formed Virbhadra Singh led Congress government in Himachal Pradesh will take place in Dharamsala from Jan 8 to Jan 11 , 2013 .

This decision was taken by the cabinet which met here within hours of taking oath Tuesday .

The 12 th vidhan sabha will begin with oath to all newly elected members of the legislative assembly . The speaker and deputy speaker will also be elected .

Since it is the first session of the new vidhan sabha the Governor’s address will also be delivered . Normally this takes place at the start of the budget session in Shimla in March .

The cabinet also decided to terminate all extensions and re-employments given by the outgoing P.K.Dhumal led BJP government .

It was decided that steps will be taken for framing policy for regularisation of PTA teachers of the state who have been agitating for long .

All notified schools which were closed during the last five years will be reviewed .

It was also decided that criminal cases registered on political grounds where no violence and breakage was involved will be withdrawn .