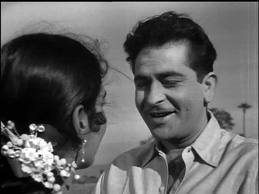 Watch this film for its beautiful songs . Watch it for the acting abilities of Nutan , Raj Kapoor as a Charlie Chaplin like tramp . And also for Lalita Pawar and Moti Lal.

Released in 1959 it won five filmfare awards including best actor for Raj Kapoor .