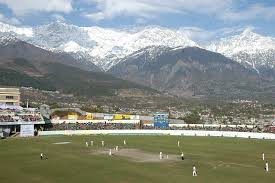 Shimla  : Accused of allotting common village land for commercial use to the Himachal Pradesh Cricket Association(HPCA) in the previous BJP government the ruling Congress government has charge-sheeted two senior IAS officers over the weekend.

Deepak Shanan then principal secretary revenue and R S Gupta then deputy commissioner Kangra have been charged with giving undue benefit to the cricket body.

The luxurious hotel complex is owned by the state cricket body and has 38 rooms and 32 huts made of imported wood and a world-class multi-gym close to the BCCI’s picturesque cricket stadium in Dharamsala.

Officials investigating the case say common village land cannot be changed to any other form of land under law . In this case the village panchayat wasn’t even consulted.

Additional chief secretary Deepak Shanan and R S Gupta Commission Inquiries have both been asked to reply to the charges within the next ten days .