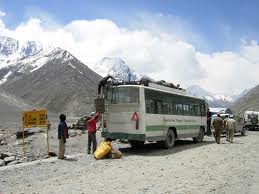 Shimla : Union leaders of the Himachal Road Transport Corporation (HRTC) have threatened to go on a two day strike starting June 19 if their demands are not met .

If talks with the HRTC management fail on June 12 , the 9000 staff could go on a 48 day strike . It will be the second strike within a fortnight .

On June 5 the HRTC strike had completely paralysed bus services across the state .

Union leaders say despite this strike the union isn’t serious about fulfilling their demands which includes converting the corporation into a department so that employees can avail pension and other benefits .

They are also demanding regularisation of temporary employees after three years of service and stopping further privatisation of bus routes .

HRTC is the biggest loss making company in the state with accumulated losses of over Rs 570 crore .

But HRTC is also seen as a social service provider with its buses plying in some of the most harsh mountain terrain in the country causing high fuel consumption and heavy wear and tear of vehicles .

Often some of the remotest villages in the hill state are connected by state roadways buses . Private buses mostly ply on better and profitable routes in and around urban areas .

HRTC runs 2018 buses and mostly on long routes , inter-state routes and in interior parts of the state . While 3200 private buses are mostly run on shorter routes within the state .