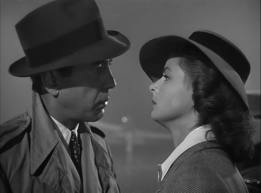 Time has certainly gone by and it’s seventy years now , but Casablanca still looks like a perfect and a flawless film . No wonder you can see it over and over and never tire  !

The dialogues are so taut and chiseled yet so rich and rewarding, not a word wasted or over used — as if one were reading the great prose of Ernest Hemingway .

Humpery Boghart’s parting line to the beautiful Ingrid Bergman , “We’ll always have Paris” is so much reminiscent of Hemingway’s own tribute to Paris in his memoirs , he said “Paris stays with you for the rest of your life .”

Much of the movie is set in a café in Casablanca and yet so much happens in this smoky and mysterious place, the movie still moves with speed and rhythm .

Each character is complete , convincing and real , no melodrama even though it was made seventy years ago .

You have to see Casablanca to understand why Humphery Bogart is rated as one of the greatest hollywood actors of all time .

Then there is Ingrid Bergman , that classic Nordic beauty  with her best performance .

Even though the film was made in 1942 it had an international cast ,only three actors in the film were American born .

Then there is the memorable music and that unforgettable song , “As time goes by”.