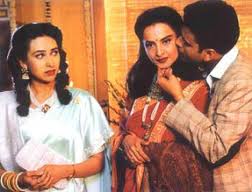 I have never understood why a great filmmaker like Shyam Benegal picked Karisma Kapoor to play Zubeidaa in this 2001 film based on the life of the actress Zubeidaa.

Long after you have seen this film what remains with you is the only the overacting of Karisma Kapoor , her shrieking and ranting .

This I say despite Karisma winning the filmfare award for best actress for her role .

The story is written by Khalid Mohammad . The music (by A.R.Rehman) but  the songs are forgettable !