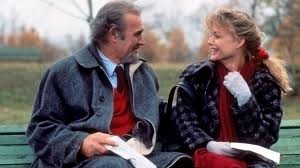 The Russia House captures the Soviet Union during the last years of the socialist regime .

A remarkable feat for an American movie to be shot on location in Moscow and other places capturing the last years of that lost era . It was released in 1990 .

It is beautifully shot in Moscow , St Petersburg and Minsk among other places . The haunting music by Jerry Goldsmith is spell bounding and evokes the world behind the iron curtain .

It is a suspense thriller about a British publisher played by Sean Connery who visits Moscow for his publishing work but is soon working for British Intelligence to investigate people in Russia .

And as he spies for the West  he encounters a Russian book editor the mysterious and beautiful Michelle Pfeiffer , they fall in love despite the huge risks .

After watching this film I wondered why Russia House hasn’t got its due acclaim from the critics . It deserves the status of a classic !