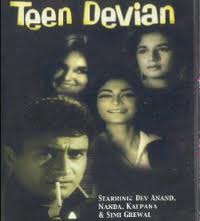 Even though Teen Devian(starring Dev Anand) was made in 1965 , strangely this film has a 50s and early 70s flavour .

Oddly it doesn’t remind you of the 1960s films , I wonder why . The black and white mystery , the high standard of the lyrics and the sweet melodies of S D Burman all belong to hindi cinema’s golden era a decade ago .

But a no more boyish Dev Anand , the somewhat westernised Kishore Kumar songs and the light story of the film takes you a decade ahead .

Listen to these two best songs of the film(by Rafi) and you know you have leapt back by a decade . Aise to Na Dekho , Kahin Bekhayal Ho Kar .

Directed and Produced by Amarjeet , the story is narrated by Ameen Sayani . It stars Dev Anand , Nanda , Kalpana and a very young Simi Garewal .

Interestingly all the characters have their real names in the film as well .