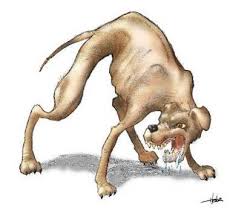 Every street and alley in Shimla has packs of stray dogs , growling and barking away into the night . And at day break there are the snarling monkeys to deal with .

So that the Shimla local and dazed tourist feels as if dogs have taken over this rickety hill station .

While monkeys have always been around in Shimla except there numbers have swollen in recent times .

It is the stray dogs menace that is the talk of the town . It is a problem created by the dull and lazy civic officials of late .

It is two years since they let loose hundreds of stray dogs into the streets from dog houses all over town . Some say now over 3000 dogs roam the streets of this small hill station as if it were dog country .

The Shimla civic body is one of the country’s oldest and is currently led by leftist CPM mayor and deputy mayor with support from the Congress which rules the state .

To the amazement of everyone these officials gave in to the demands of idle animal rights activists who were not happy with the upkeep of these dog homes.

Instead of improving these dog houses , they decided to take the most bizarre step and let loose the dogs into the streets.

It did not occur to these meek civic officials and animal rights activists to improve the dog houses and keep the animals there . Instead they chose the organic way , to populate the roads and neighbourhoods of Shimla with animals who have no owners .

So if you are in the heart of Shimla , enjoying your holiday,  get ready for strange scenes and encounters with stray dogs growling past you on the Mall Road and the overlooking Ridge .

Shocked tourists and honeymooners often peep out of their hotel windows in the dead of the night as packs of dogs often fight battles over territory .

The barking often goes on all night long . And as if the dogs were not enough there are also the monkeys to deal with . The monkey activity starts at the crack of dawn as they pound on your tinned roof and balcony .

Walking back from the market place you have to devote all your energies to saving your supplies from a monkey loot . And on the road you have the dogs following and sniffing you .

Every day there are incidents of monkeys snatching your burger , ice cream and even your spectacles . People worry for their children walking to and fro to school from dog and monkey attacks .

And when you point out the animal menace problem to bored civic officials they give you the usual answer  We are soon going to get rid of Shimla of stray dogs. Of course that day never comes .