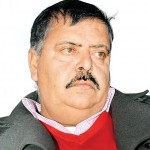 Dhammi was quoted as saying that he has left the BJP as it did not respect party workers like him .

Some five years ago he left the Congress party with much fanfare and speculation is rife that he could return to the party and claim a ticket from the Manali seat .

Dhammi has been in politics for over 40 years and is seen as a strong politician in the Kullu valley .

Assembly polls are expected to take place in October this year .