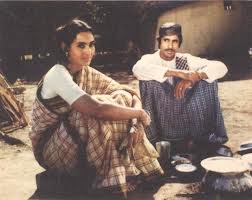 There is no doubt that Amitabh Bachchan’s  finest work was in the 1970s .

People rave about Zanjeer , Deewar , Kabhie Kabhie , Sholay and Trishul among others but they forget Saudagar.

This 1973 Tarachand Barjatya film has him playing Moti as a ‘gur’maker and trader . It is probably Bachchan’s most unglamourous roles .

Clad in a lungi , climbing up tall trees in search of gur ras(juice) which he makes into gur and sells in the nearby bazaar.

Then two women come into his life . Nutan as Mijuben and Padma Khanna as Phoolbanu .

Phoolbanu is young and seductive but is a complete failure in his real life .

But the older woman is Moti’s first wife Mijuben . She is gifted , devoted and loving . Except Moti only uses her to become a better ‘gur maker’ and then turns treacherous and abandons her .

Mijuben’s short lived happiness is shattered when the  love of her life Moti accuses her of being unfaithful and divorces her . Hurt she walks out of his life angry and bitter.

Meanwhile , Moti’s short sensual pleasures end abruptly with the tactless Phoolbanu as his second wife and reality hits him hard . His gur trade crashes , his relationship sours with her and his life is in ruins .

Full of remorse and shame the desperate Moti is at the doorstep of Mijuben asking for forgiveness . The bitter Mijuben softens as she hugs Phoolbanu who calls her aapa(sister) .

The film has an open ending and we are left wondering how the lives of the characters move on .

Nutan one of the greatest female actors of hindi cinema has a powerful performance in Saudagar .

Music is by Ravindra Jain . “Sajna hai mujhe sajna ke liye” is one of Lata’s most haunting songs of the 1970s .

This off beat classic is a treasure of the 1970s hindi cinema .