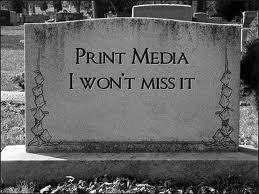 The chief of firstpost India’s fastest growing news website believes traditional print media and even news television channels in the current form have no future .

“Print media , general magazines  and television channels with such high costs , all of it I think is in big trouble ,” says Jagannathan .

“Long form journalism , may barely survive given its low cost and specialised writing,” he believes .

“I think the internet is the only game in town. With such low costs the web is able to deliver so much ,” he added.

“I think if tv news channels have to survive they must change the current model which is very expensive,” he said .

“The biggest problem is that the current model(both print and tv) is over dependant on the corporate sector. You can’t write against a single company even if it is the most crooked ,” Jagannathan said .

Asked about Mukesh Ambani’s stake in firstpost and what would he do if there is an anti-story about him Jagannathan said.

“If there is a story on him we will handle it like any other story because a genuine story has to be played,” he asserted .

Asked about firstpost’s revenue model he said ,”We are largely driven by advertisements . Given our low costs we should be doing fine in about three years.” he said .

Having grown rapidly firstpost is barely a year old but is already ranked at below 2000 in the world and below 200 in India .