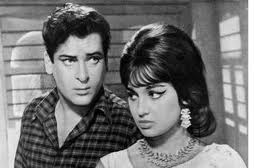 Shammi Kapoor ruled the 1960s and his reign was drawing to a close with the release of Pagla Kahin Ka in 1970 . And he went out and rode into the sunset with style playing a madman !

Sometimes posing mad sometimes a real madman . I think the film could not have had a better title , Pagla Kahin Ka , it is one of those lines which cannot be translated into English , try it !

Asha Parekh plays an intense role as a psychiatrist in a mental asylum .

Even though it did not do well at the box office , Shakti Samanta signed Asha again for his next film (Kati Patang) with Rajesh Khanna and was a super hit .

Helen the queen of cabaret dancers plays a rape victim and still remembers as one of her most memorable films.

The best song of the film is : Tum Mujhe Yun Bhula Na Paoge sung many times in the film by Rafi and Lata .

Manna Dey sings one of  the most unusual songs of his career : Maire Bhains Ko Danda Kyon Mara , a song you don’t hear on radio anymore .

Music is by Shankar Jaikishan and lyrics by Hasrat Jaipuri.

Pagla Kahin Ka has shades of Teesri Manzil which also starred both Shammi and Asha and was released four years earlier .