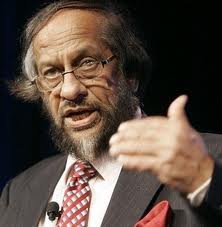 Shimla : Leading environmentalist R.K.Pachauri on Tuesday here expressed his concerns about promoting nuclear energy saying the public needs to be taken into confidence.

“Nuclear energy cannot be wished away , yet it has some problems . It needs to be demystified and the public needs to be taken into confidence ,” said Pachauri here .

“France which generates 80 per cent of its energy from nuclear power is planning to reduce its production by shutting down many plants ,” said Pachauri .

“The new president of France François Hollande who is personally known to me has said he plans to drastically reduce France’s dependence on nuclear energy ,” he said .

Pachauri has served as the chairperson of the Intergovernment Panel on Climate Change(IPCC) and was awarded the Nobel peace prize in 2007 .