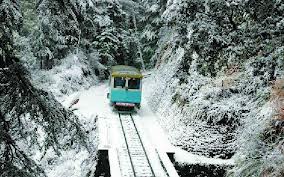 After a gap of half a year the rare single bogey vintage rail car is back on the winding Kalka-Shimla railway mountain track which is also a UNESCO world heritage site .

The rail car looks like a world war II era bus the only one in India and one of the very few left in the world and is particularly popular with westerners .

Railway officials say ever since it is back it has already been booked several days in advance .

Since very few rail cars operate in the world the Indian railways finds it hard to procure spare parts to repair this  locomotive which runs on 16 wheels .

“Not only were the wheels changed but also the 12 seats as well,” said Arora .

The rail car was introduced by the British on this track in 1927 . In 1908 the 109 year old track was given world heritage status .

Trains chug on slowly on this route and the journey takes almost 6 hours while it takes only two and a half hours by road .

The rail car though is a bit faster and takes four and a half hours .

The rail track rises from Kalka at 2800 feet in the Himalayan foothills and rises to Shimla the erstwhile summer capital at 7000 feet above sea level.