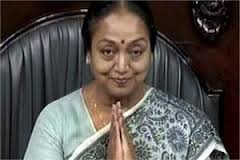 Addressing the golden jubilee celebrations of the Himachal Pradesh assembly here Monday Meira Kumar said dissent and debates can happen within the rules of the house without disrupting entire proceedings .

“Even though important bills were passed by parliament 73.5 hours of valuable parliament time was lost during the recent monsoon session ,”she said .

“Parliamentarians and legislators must be serious about their work and bring about change in their daily lives ,” the speaker added.

She raised concern that despite important laws being passed social evils like dowry deaths , child foeticide and carrying of night soil on the head were still continuing .

In May this year president Pranab Mukehrjee had also addressed the state assembly .