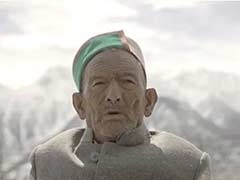 Shimla : He lives up in the Himalayas in northern India . And at 97 years is believed to be India’s first voter. Shyam Saran Negi is raring to vote for a record 16 th time along with 800 million other eligible Indians in the world’s largest democracy .

Google India has put out a video ‘pledge to vote’ Saying “This is the true story of a man who never missed an opportunity to vote.” In less than a week it has got almost half a million clicks .It is translated into 15 languages .

This you tube video by the giant search engine Google now seems to have made him famous worldwide . In less than a week it has already had (489,855) hits .

The short film shows Negi sipping tea in his veranda overlooking spectacular snow covered peaks in Kalpa village(2759 m). As as he gets ready to vote putting on his handwoven coat and cap . And latching on to his walking stick .

Then the lone 97 year old walks out of his house upright and sure footed on the icy road .

The road winds through apple orchards and pine woods before he reaches the polling station to a grand welcome by fellow tribals before he casts his vote .

India’s first polling station was set up at Kalpa .

“Before the roads got blocked in deep winter we voted several months ahead of the rest of India on Oct 25 1951,” explains Negi .

“Since then I have voted every time both for the general and local assembly elections. On May 7 , I will vote for a record 16 th time(general elections),” he says .

The video has him saying ,”I still remember that day all those years ago .It was snowing heavily as I walked to vote for the first time.”

Asked if Negi supported the Congress or the BJP he said .
“I will vote for a party which will sincerely attempt to change the country and provide a good government,” Negi said.

He didn’t seem to be particularly excited by the election commission’s NOTA(none of the above) option for the first time for voters .

“I am not in favour of NOTA(none of the above) option for voters .Surely things are not so bad that there is nobody to vote for among the candidates,” speaking through a neighbour Negi told Sun Post by phone from his native village .

Tribal Kinnaur borders Tibet . Himachal Pradesh province also has the world’s highest polling station at Hikkam at over 15,000 ft , not far from Kalpa .