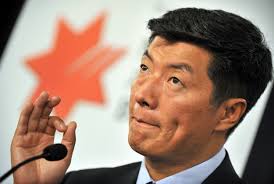 Dharamsala : Playing host to Tibetan refugees for over half a century the northern Indian hill state of Himachal Pradesh has decided to provide a red beacon to the Tibetan prime minister in exile .

Due to fear of annoying China the Tibetan government-in-exile is not recognised by any country in the world .

After a failed coup against the Chinese communist party in 1959 the Tibetan spiritual leader the Dalai Lama fled Tibet along with his followers in 1959 . In 2011 he stepped down as the political head of his people .

The decision to provide a red beacon privilege was taken over the weekend by the state government here. A revolving red beacon atop your vehicle is a privilege in India .

Chief Minister Virbhadra Singh said , “The prime minister of the Tibetan government-in-exile is a democratically elected leader and the Dalai Lama is our respected and distinguished guest . Providing security and respect to them is our responsibility.”

Harvard educated Lobsang Sangay is the prime minister of the Tibetan government-in-exile which is based in the hill town of Dharamsala .