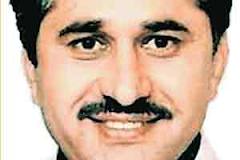 Shimla : On the run for the past month in connection with the murder of a young woman the newly elected Congress MLA Ram Kumar Chaudhary on Tuesday surrendered in neighbouring Haryana’s Panchkula .

He has been sent to police custody for six days .

Police was looking for Chaudhary after a 24 year old woman was found murdered with her head smashed in Panchkula on Nov 22 last year.

During investigations her mobile phone details revealed the MLAs connection with the incident . Besides Chaudhary three others were also booked by police .

Chaudhary reportedly knew Jyoti for many years and she was staying at a PG accommodation in Panchkula and her expenses were borne by him . She was from a village in Punjab’s Hoshiarpur region.

Chaudhury was elected from the Doon seat in Solan district of Himachal but had gone missing for the past few weeks .

On Monday the Haryana police had announced a reward of Rs 200,000 (Rs 2 lakh) for helping catch the elusive MLA .

The MLA’s anticipatory bail plea was rejected by the court on Dec 27.
Chaudhary is the son of four-time Congress MLA and leading businessman, Lajja Ram .