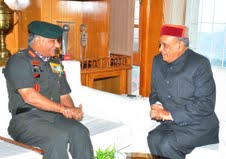 A spokesman of the state government said both discussed various matters of strategic importance  including construction of the railway line to Leh below the Rohtang Pass .

The relocation of the Dogra regiment from Faizabad to Una was also discussed . Besides setting up of a canteen stores department (CSD) among other issues .

Since the army chief did not speak to the media it isn’t clear what else was discussed at the meeting .

Dhumal’s son and MP from Hamirpur Anurag Thakur had sparked of another controversy by leading a signature campaign to take back the ground and build a concrete BCCI ground here .

Locals in large numbers have opposed the move to build a cricket ground at this historic Raj era annandale ground which is surrounded by a thick pine forest .

They say if the ground is handed over to the state government it should be used as a venue for holding public festivals and other sports activities without disturbing the fragile forest which lies at the edge of the ground .