Shimla: Around 56 houses were gutted in a midnight fire in Himachal Pradesh’s Tangnu village in Rohru area early Sunday.

Villagers said the fire began around 1 am and and soon engulfed the entire village made of wood and stone. 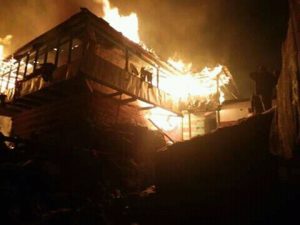 Most of the houses have been burnt down.By the time the fire tenders reached the spot the damage had been done. The loss is estimated to be Rs12 to Rs15 crores. The cause of the fire is not known.Tangnu is 41 km from Rohru.

No loss of human life has been reported but 10 sheep and 4 cows died in the fire. Around 250 people belonging to 48 families have been affected by the fire. Each family has been given Rs 40,000 as relief.They have been housed in the village school.