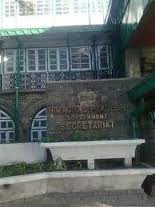 Sharma has been a close aide and private secretary of chief minister Dhumal for around nine years . Recently the opposition Congress had also requested the EC to transfer  Sharma from this important post.

According to the order of the government , Sharma will be allotted a posting later .

Arun Sharma has been director tourism for the last almost five years , but recently the tourism posting was also snatched from him .

Another official J.R.Katwal DC Una has also been shifted .

According to the new orders Subashish Panda will be new DC Shimla and Kadam Sandeep Vasant DC Una .

The state goes to the polls on Nov 4 and counting takes place on Dec 20 .