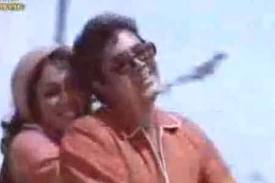 This was the golden age of Rajesh Khanna , whatever the superstar touched it turned into gold

In this GP Sippy film (Andaz) 1971 , Khanna appears on screen for only a few minutes with the famous Kishore Kumar yodel “Zindagi Ek Safar Hai Suhana” and a couple of other scenes .

And in his inimitable style rides a motorbike with a very young , slim and shy Hema Malini .

But the actual story of Andaz revolves around Shammi Kapoor and Hema . Both meet after a painful past .

This was Shammi’s last film as a lead man . Having just turned forty Shammi was already putting on a lot of weight and looking much older.

But despite this Shammi portrays a serious Ravi with his usual style. And like many of his earlier films this is also shot in his favourite Kashmir valley .

Andaz is also remembered as the last film of the great Shankar-Jaikishan duo . Soon after Jaikishan died of liver cirrhosis , he was only 42 .

“Zindagi Ek Safar Hai Suhana” by Kishore Kumar is the last great song of the two .

The script is by Salim Javed . The film did quite well at the box office .