Naseerudin Shah has had a glittering career . And his role as an eccentric and awkward Parsi in Pestonjee is outstandin

Released in 1987 the film takes a close look at the Parsi community in Bombay .

The story is about two friends Pestonjee(played by Anupam Kher) and Phirojshah(Naseer) and Jeroo(Shabana Azmi) And in this closed Parsi community both like the same woman . 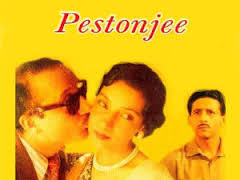 But it is Pestonjee who marries Jeroo and Phirojshah is quietly happy for them.

He moves out of Bombay but remains in touch by post. When he returns a few years later he is shocked to find their marriage is in tatters .

The childless Jeroo has become hysterical and callous while a failed Pestonjee finds refuge in another woman Soona Mistry (Kiron Kher) . A straight man Pestonjee is furious with his friend.

Some years later when Phirojshah returns to Bombay again Pestonjee is delighted to have is old friend back and celebrates into the night .

In the morning there is a tragedy Pestonjee suddenly dies of an heart attack .

Phirojshah discovers that it is Soona who has always helped Pestonjee in such a difficult time including bearing his death ceremony expenses .

When he visits Soona to return her money he discovers that Pestonjee has a child from Soona and this child has been named after Phirojshah by his friend . He sees that Jero has already forgotten her husband and is deep into her piano lessons .

The film is based on a story by journalist B K Karanjia.Directed by Vijaya Mehta it won the best national feature film in hindi award .And music is by Vanraj Bhatia.