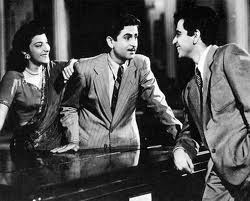 Here we have Dilip Kumar and Raj Kapoor —– the only time together on screen . Both play their roles with elan and style(andaz) in this 1949 release  , this triangular tragic love story was a big hit .

Then there is a young , bubbly and willowy Nargis in this her first film as a leading lady .

Andaz is shot in palatial houses with birthday parties , with plenty of songs on the piano .

Then there is Shimla the queen of the hills just left empty by the British . In this mysterious place Nargis rides horses in deodar woods and a prince charming rescues her from falling down a cliff and the love story begins .

Nargis and Raj Kapoor playing golf at Naldehra and travelling by the steam engine toy train and hiding for years in the hills from her silent lover (Dilip Kumar) .

Directed by Mehboob Khan , music is by Naushad .