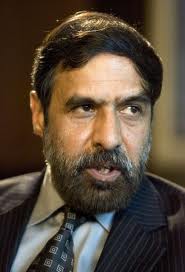 Shimla : Chief minister P.K.Dhumal got a fresh beating on his knuckles by union commerce minister Anand Sharma Wednesday who accused him of not acting against the Jaypee group of industries and allowing the firm to violate the law.

The court verdict also ordered the group to dismantle the 60 MW thermal plant in Solan district .

“Irrespective of small or large corporate who have violated the law and been held accountable by the high court . In such a situation the state government has a lot to explain to the public ,” Sharma said .

“The Dhumal government has clearly failed to take action against Jaypee and I suspect it is in collusion , connivance with the group and has overlooked the misdeeds of the company ,” Sharma alleged .

“On the other hand the Centre has approved a spice park at Nadaun in Dhumal’s home district , but unfortunately the state government is creating long delays in executing the project ,” he said .

Sharma arrived here Wednesday to his hometown Shimla to canvass for the civic polls on May 27.

“The Dhumal government must answer why a huge sum of money alloted by the Centre under JNNURM for the beautification of Shimla was diverted and under spent ,” said Sharma .

He further accused the state government of failing to run the public distribution system (PDS) in a proper manner .