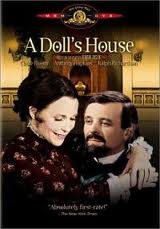 Anthony Hopkins is such a great actor that he carries all his movies on his shoulders . He also carries ‘A Doll’s House’(1973) but Claire Bloom takes away the film from him in the second dramatic half .

This is a story of a childlike Nora Holmer and her struggle as a woman in a man’s world in nineteenth century Europe.

When her past financial bungling comes to haunt her . When her husband Torvald finds out and overreacts and this is the turning point of the film.

The film story completely turns on its head and Nora realises who she is and where she stands . She realises how first her father and now her husband have exploited her. And even if she is completely devoted to them they treat her like an unthinking doll .

Nora tells Torvald that for the first time in their superficial eight year old marriage never has she been so lucid and convinced , and saying this she walks out on her stunned husband for good .

Based on the classic Ibsen play written in 1879 by the Norwegian playwright who is considered the greatest playwright since Shakespeare In Europe .

And even as you watch the film you are always reminded that you’re watching a live play so skillfully has this play been turned into a film .