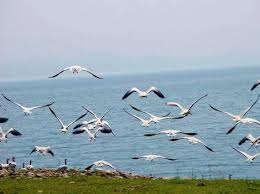 Shimla : Stray dogs attacked a flock of sheep grazing at the edge of the Pong dam drowning at least 45 of them in the lake in Himachal Pradesh’s scenic Kangra valley  , police said .

Gaddi shephereds said a pack of stray dogs suddenly arrived at the spot and pounced on the grazing animals creating panic among the 265 sheep . All the petrified sheep jumped into the deep lake

By late evening many of the animals swam to safety but around 45 drowned in the reservoir Thursday .

Local government officials have been quoted as saying that the shepherds would be compensated for the loss .

As spring sets into the hills shepherds begin to move their livestock higher up from the Himalayan foothills where they spend the winter .