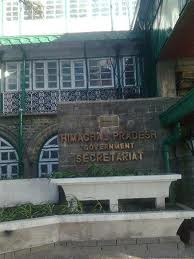 In a letter written to the state chief secretary S Roy , and distributed to media persons Bhattacharya has pointed out the glaring manner in which Arun Kumar Sharma is being promoted at the cost of other IAS officers in the state .

He says Sharma is being promoted because he has been Dhumal’s private secretary and close confidant for nine years including five years in the previous term of Dhumal .

“I am surprised at the way the Himachal government is effecting the transfers of IAS officers by throwing the rules of good governance in the air and creating a situation of confusion and dissatisfaction in the bureaucracy .”

“The recent posting of deputy commissioner Shimla is a
glaring example of this phenomena of talibanising of the administrative procedures of the state ,” Bhattacharya said .

“It seems no other officer in the Himachal cadre is capable of holding the post of director tourism other than Sharma ,” Bhattacharya said in his letter to the chief secretary .

He said Manish Garg a much senior IAS officer wasn’t even allowed to finish a month as DC Shimla and has been shifted out to accommodate Sharma .

He has also pointed out several glaring examples of postings by the Dhumal government including the most bizarre when Manisha Nanda a senior IAS officer seen close to the BJP was posted HPTDC , MD , and also allowed to hold the additional charge of director and secretary tourism .