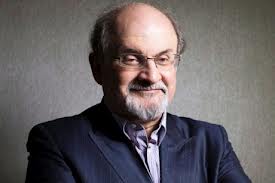 The brilliant Salman Rushdie maybe often a complicated writer to read but his interviews are always frank , witty and insightful .

His 650 page plus long memoirs(Joseph Anton) have just been published and Rushdie is doing television interviews . I have seen him on India’s NDTV , CNN/IBN . On CNN international with Fareed Zakaria .

Excellent footage of the English countryside , unknown country cottages of friends and other places where he remained in hiding in those difficult Fatwa years .

This documentary has Rushdie’s interviews at most of these places . There are also interviews of his third wife Elizabeth West , his sister , his two sons the American publisher of the Satanic Verses and a host of other writers.

He tells us he learnt about the Ayotollah Khomeini’s Fatwa to murder him on the day he was to attend the memorial service of writer Bruce Chatwin and friend which he did attend . Here Paul Theroux told him next week we might be attending your memorial .

Rushdie visits Cambridge and tells us the influence of his history professors (one of them he meets and interviews on this programme) .

Rushdie tells us that the birth of Satanic Verses took place at Cambridge .

He tells he met and was influenced  E M Forester in the corridors of Cambridge and that “Forester was a very modest man.”

“Forester met me the day Evelyn Waugh died and he told me Waugh was a truly great writer not like me (Forester)”.

Rushdie tells us how he was influenced by Forster but instead of writing cool prose like him Rushdie chose to write a prose which was hot , smelly , vulgar and crowded. And so his magnum opus Midnight’s Children was written .