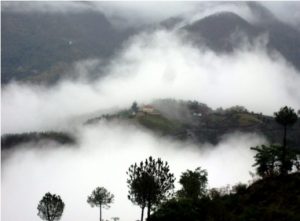 Shimla : The monsoon kept its date with Himachal Pradesh covering the entire state in the early hours Tuesday .

The weather office here said the SW monsoon has advanced into entire Himachal and neighbouring Uttarakhand , Jammu & Kashmir and parts of Punjab. Haryana and Uttar Pradesh.

Moderate to heavy rainfall has been forecast in the next 48 hours in Himachal. Heavy rain warning has been issued at isolated places .

The sudden arrival of the monsoon has come as a pleasant surprise to the hill folk as the weather office was expecting a late arrival this time .

Usually with the arrival of the monsoon a dip in tourist arrivals takes place in the hill stations of Himachal after the peak rush in May and June .