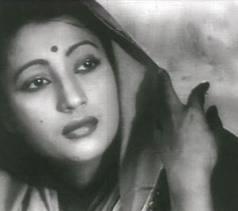 But despite her great acting abilities she should not have acted in Mamta (released in 1966) . A powerful role , in fact a double role .

This role was just not meant for Suchitra Sen particularly when she portrays Deviyani (A Lucknow prostitute) .

No doubt Sen is exceptionally beautiful and a talented actress some say she even turned down the Dadasahib Phalke award a few years ago .

But to play a chaste speaking urdu speaking tawaif from Lucknow wasn’t a wise choice on the part of Sen . With her thick Bengali accent she could not justify the role and the character .

Remember she was essentially a Bengali actress , She could barely manage a bit of hindi in the few hindi movies she did .

But it was near impossible for Sen to carry off the role as a urdu speaking tawaif .

Despite the powerful double role she plays in the film,despite the entire film revolving around her , this role was only a disaster .

Only wonder why the director Asit Sen did not consider Meena Kumari , Waheeda Rehman , Nargis , not Madhu Bala as she was ailing by then .

An then there is Ashok Kumar , always the natural actor like a breath of fresh air !