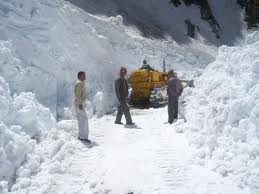 Shimla : Connecting the remote Chamba and Pangi valleys in Himachal Pradesh the Saach pass has been opened for vehicular traffic , an official said Thursday .

The pass was closed in November last year . Efforts have been on for the past three months to clear the pass which was under 40 feet of snow . The pass sometimes closes for winter in October after early snows .