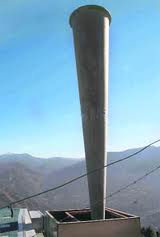 Shimla : Amid the ruling Congress and the opposition BJP sparring over the issue of anti-hail guns in the state assembly here Monday . The government said it would continue with anti-hail guns for one more year .

The BJP wanted to know how successful the installing of anti-hail guns had been to farmers in protecting their crops from hailstorms .

It asked the Congress government if it had plans of installing more such guns in the apple growing areas of the hill state .

In reply the horticulture minister Vidya Stokes told the house that there was a big question mark over the effectiveness and feasibility of anti-hail guns in protecting the apple crop from damage .

“A cross section of farmers have met me and 80 per cent of them feel that anti-hail guns installed on experimental basis at three places in Shimla district have failed in protecting their fruit crop ,” Stokes said .

“But despite such negative feedback the government would not remove these guns and would make a decision after a year ,”she said .

“Most of the farmers were keen on installing anti-hail nets on their trees as it was a far more effective method than anti-hail guns ,” the horticulture minister said .

“We have already announced 80 per cent subsidy on anti-hail nets in the state budget ,” she said .

Intervening in the debate the leader of the opposition P.K.Dhumal said the government was dismissing the effectiveness of these guns in a haste .

Dhumal said his government had imported the technology from the US and the project was funded by the Central government .

In reply chief minister Virbhadra Singh said anti-hail guns technology was a 19 the century  outdated technology . It had failed long back and was not in operation anywhere in India .

“This theory has been discarded by the entire world ,”Virbhadra told the house .