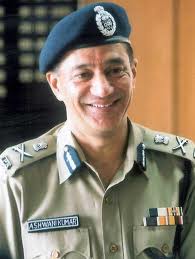 Shimla : Ashwani Kumar a former Himachal Pradesh cadre IPS officer who retired as the CBI director in Nov 2010 has been appointed Governor of Nagaland by President Pranab Mukherjee .

Kumar is the first head of the Central Bureau of Investigation to be appointed as Governor .

Kumar hails from Nahan town in Himachal’s Sirmaur district has also served the hill state’s police chief(DGP) before taking over as CBI director from Aug 2008 to Nov 2010 .