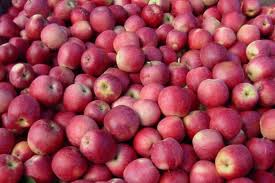 Shimla : The spread of the dreaded premature leaf-fall disease has set panic among apple farmers in the hills of Himachal Pradesh where the harvest is at its peak .

The disease has spread rapidly in the past couple of weeks adversely affecting the quality of the fruit . It is reducing the shine , colour and size of the fruit .

The premature defoliation of the leaves is also causing black spots and blemishes to appear on the fruit skin .

The crop ripens late in the higher elevations , but due to the spread of the disease farmers have been picking the fruit early which is causing a glut in the market .

The premature leaf fall disease is caused by fungi and mite which flourishes in wet conditions .

Farmers are puzzled that despite carrying out 8 to 10 sprays of their orchards in the space of couple months the disease has not been contained .It raises its head in the monsoon for the last decade or so .

Farmers suspect the fungicides and insecticides available in the market could be spurious .The disease is more widespread in orchards where the soil captures moisture .

Currently over 1100 truck loads of apple are leaving the state every day . The harvest began in mid July and will end in mid October .

After two years of poor crops the state is expecting  a normal crop . Himachal Pradesh accounts for a third of the apple production of the country . The remaining is produced by neighbouring Jammu & Kashmir .