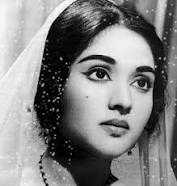 She came into hindi films all the way from South India and made it big . So big that she became the first female superstar of the golden era .

And this 40 song MP 3 collection does justice to her illustrious career which lasted some twenty years .