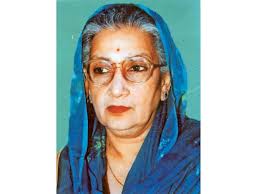 Sister of Gaj Singh the maharaja of Jodhpur Chandresh Kumari Katoch is married into the Katoch’s royal family in the Kangra valley of Himachal Pradesh.

During the last Congress government in the state she was an MLA from Dharamsala and also served as the state health minister in the Virbhadra government .