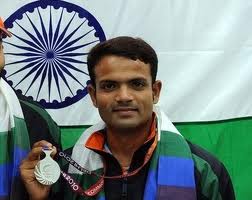 Shimla : Vijay Kumar made India and his little known Hamirpur in native Himachal proud by winning a silver medal in the men’s 25 m rapid fire pistol event in the London Olympic games on Friday .

The 26 year old soldier(army subedar) found the target 30 out of 40 attempts in the series comprising eight rounds of five shots each .

This is the second medal so far in the London games after Gagan Narang won bronze . It is so far the fourth medal in shooting in Olympic history .

Kumar dedicated his medal to his state and said: “My medal will be a big boost for the state of Himachal Pradesh.”

“I stuck to my plans and executed them well,” he added.

Soon after his win his father, a retired Army subedar, said his son was sure he would get a medal. “I spoke to him and he sounded calm.”

“He told me he will get a medal today. He was not sure which one but he said he will get one for sure,” the proud father said.

The Himachal government has immediately announced a prize money of Rs one crore to Vijay Kumar .