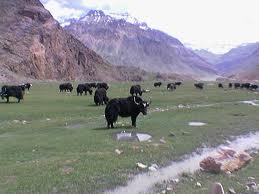 The yaks were domesticated and owned by locals from nearby villages . The animal death toll could rise as people count their missing yaks .

Kinnaur has had unusually heavy snowfall last week . Scenic Chitkul and Kalpa villages are under 7 feet of snow, officials in the area told Sun Post .

Five people were killed by an avalanche last week in the region.

The entire Kinnaur valley is cut off from the rest of the world . Some say it could still take around a week to clear snow on the national highway connecting to the state capital Shimla .

Several tourists are also stuck in the valley and efforts are being made to airlift them .